Instonians captain Andrew White is backing his young guns to make a big contribution when the 2020 season kicks off on July 18.

The Shaws Bridge side have one of the youngest teams in the top-flight and have added further to that with the signing of 19-year-old batsman Marcus Poskitt from Bready.

Oliver Metcalfe, James Hunter and Ben Rose are just a few young stars that have cemented their place in the Instonians first team and White will be looking to give even more of the youth talent an opportunity this season.

The ability is clearly there in the junior section and it could be an exciting few years ahead at the club as the Graham Cup, Banoge Cup and Quoile Cup winning sides of 2019 continue their progression.

Instonians will start their Robinson Services Cup campaign with a home clash against Waringstown before travelling to North Down on July 26 for a first round LVS Cup tie.

All matches will be played in the Twenty20 format this year and with the profile of his squad, White is hoping they can produce some impressive results.

“Whether it’s 50 or 20 overs, I don’t think it makes a big difference in how you approach it at club level,” he said.

“You still have to play properly. We have a very young squad, myself excluded! There is no one else close to thirty really so they are all very young and they enjoy the T20 aspect.

“Everyone is looking forward to this new format. I like the idea of playing seven matches and then going into a play-off. I think it’s going to make sure there is something hanging on every game right up until the end.

“Because of the young nature of our squad hopefully we will be one of the better fielding sides in the competition.

“With the likes of Metcalfe, Hunter, Poskitt and Ben Rose I think we have enough young firepower there to cause teams some problems.” 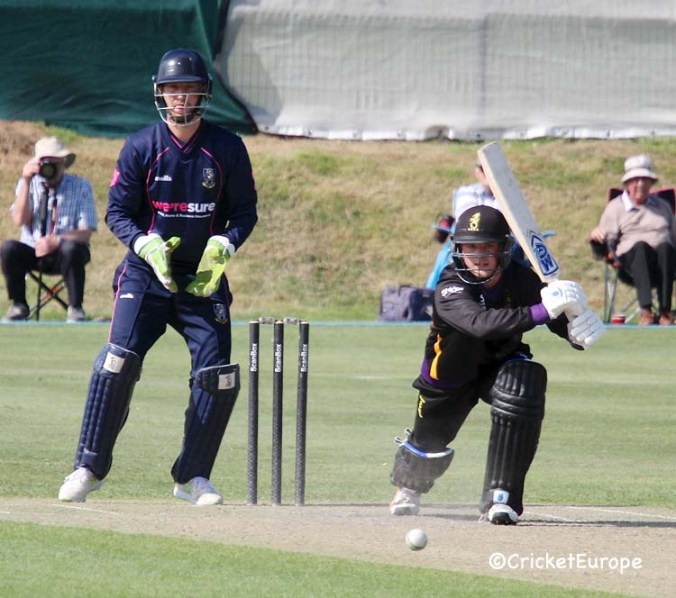 Over the last few years it has been the likes of White, James Shannon, Nikolai Smith and Shane Getkate leading the way for Instonians, helping the club reach five Challenge Cup finals since 2012.

There has been good signs that the next generation are now ready to step up and help their more experienced team-mates push for further success with Oliver Metcalfe, who is still a teenager, scoring an Irish Senior Cup century last season.

“Metcalfe, Hunter and Poskitt are now of the age where they’ll be looking to stamp their authority on proceedings rather than the likes of Shane, Nikolai and myself as they have watched for the last few years in terms of finding their feet and learning the ropes,” added White.

“They’ll be keen to make sure it is their time to put on a show.”

Getkate is set to miss at least the first three matches of the season with his likely inclusion in Ireland’s ODI squad that will depart for a series against England on July 18.

With his regular involvement in the international arena since last February, White has had to deal with losing his star player on occasion while some of the younger members have missed games through Ireland underage involvement.

With plenty appearing at training since it was allowed to resume, White is happy with the squad he has and believes new second team captain Jonny Peak will play a big role in helping to bring through even more contenders for his side.

“It’s just a standard thing at Instonians where players come and players go because there is always representative call-ups somewhere down the line,” he said.

“We are used to dealing with people being missing so that won’t be a major issue. We have plenty to choose from and we have the guts of 20 down at training.

“Jonny Peak is looking after the second team and is going to be player/coach there. With his connection with the school I think it’s a great fit.

“He is very enthusiastic, has a great knowledge of the game and knows what is required at Premier League level because he played for a long time at different clubs.

“He’s going to be a vital cog in the club’s future because he knows the young guys coming through the school system and he can continue to push them.”

White will be looking to give even more young players top-flight exposure as the season goes along but wants to make sure they are ready for that call-up.

“My mind is very much in terms of seeing can we get some of these younger guys exposure to stand us in good stead for the next couple of years,” he added.

“It’s finding a balance of being competitive and making sure you win games but if ever there was a year to have an eye on the future it’s this year.

“You have to be putting guys in that you’re comfortable will be at ease and not be overawed or feel out of their depth.

“There is enough hunger there in those guys and they all want to play their part and want an opportunity in these games.”

That was in contrast to their Premier League form which picked up in September but White will be looking for a bit more consistency from his dangerous side.

“We have those players in our ranks so there is no fear of taking on anybody,” he said.

“It’s just a case of being consistent and that’s key. You look at our league position over the last couple of years and we have struggled to be brutally honest.

“Some of the players haven’t scored the runs or taken the wickets for us to stay out of that relegation trouble. I’m excited by the group we have and the younger guys coming through.

“They are a year older, hopefully a year wiser and they can contribute to some good performances.”